Violent crimes are those that invoke fear in the common citizen. Violent offenses usually contain some element of force or a threat of force against a person. Some jurisdictions classify offenses as violent crimes if the crime involves a strong likelihood of psychological trauma to the victim. An example of this is the classification of residential burglary as a violent offense in the State of Virginia.

The state calls its own violence law, but that of the individual crime. – Max Stirner

Violent Crimes at the Federal Level 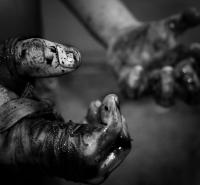 Violent crimes are also known as “violent felonies.” The Armed Career Criminal Act or “ACCA” is a federal law that says that an offender who has three prior convictions for violent felonies and uses a firearm or explosive to commit a crime must be sentenced to a mandatory minimum sentence of 15 years.

This led to the question “what constitutes a violent felony?”

In the case of DePierre v. U.S , the Supreme Court set out to answer the question of what constitutes a violent felony for purposes of the ACCA. The Court held that if a crime is punishable by over one year in prison and the crime involves a burglary, arson, extortion or use of explosives, the crime is labeled a violent felony. But a violent felony may also be unspecified conduct that “presents a serious potential risk of physical injury to another.”

Since its decision in DePierre, the federal government has continued to list crimes that are considered “violent.” Violent crimes are seen as those that can cause serious bodily injury to another person. Also included are regular crimes in which a firearm was used. The most common violent felonies at the federal level are

This is not an entire list of federal crimes considered violent by the government. But the general rule is that if it really hurts another person or if a firearm is involved, the crime is one of violence and can carry heavier sanctions.

Violent Crimes at the State Level

Most states have a much broader definition of a violent crime or violent felony offense. As mentioned above, a violent crime can be any crime that actually causes harm to another person or one that causes psychological trauma. States also include charges that are considered offensive to us as American citizens.

The following is a list of crimes considered to be violent under State standards.

Violent Crimes that Cause Trauma

Fear follows crime, and is its punishment. – Voltaire

When a person is found guilty of a violent crime at the State level the penalties are more severe. In jurisdictions that use scoresheets to determine an offender’s sentence, a violent offense will usually score mandatory prison time even if the offender has no prior arrests or convictions. This is especially true if a firearm is used.

How Can a Firearm Enhance a Felony to a Violent Felony?

People are scared of guns. This is why some offenders choose to use them in their crimes and why the penalties are so severe. Even the simplest of crimes becomes a violent felony if it is determined a firearm is used.
The highest courts in most states have ruled that possessing a gun or firearm during the commission of a crime is a serious matter that warrants additional penalties. Almost all crimes involving firearms carry a minimum jail sentence of at least 2 years. In some states the minimum penalty for possessing a firearm during a crime is 10 years.
In states such as Florida, even if you don’t have a gun or firearm when you start the crime, if you obtain one during the commission of the crime it is considered an armed charge. For example, if you break into a house and steal a gun, it is considered an armed burglary carrying a minimum prison sentence. This is true even though you did not have a gun when you first entered the home.
Violent crimes or violent felonies are very serious charges. Violent felonies carry minimum mandatory penalties even if an offender has no prior offenses. Offenders who are convicted of violent crimes or violent felonies have a much harder time finding housing and jobs upon release from prison. There is also social stigma associated with these types of convictions. These charges should not be taken lightly and if you are charged you should invoke your right to an attorney immediately!