The United States of America has two types of courts, Federal Courts and State Courts. At both the federal and state level there are two different sides to the court system. There is the civil system and the criminal system.

The civil system is all about money. Civil law deals with lawsuits between two or more private individuals or companies. The punishment for losing a civil suit is loss of money or loss of property. Civil suits include actions such as evictions, class action lawsuits and mortgage foreclosures.

The United States is the greatest law factory the world has ever known. – Charles Evans Hughes

The criminal system is all about crime and punishment. Criminal law deals with lawsuits brought by the government against a private person or company who broke a criminal law. In a criminal case the punishment for being found guilty is usually some type of fine, probation or jail sentence. A criminal case can only be started if a person breaks a criminal law.

It is not a Justice System. It is just a system.  - Bob Enyart

In the criminal justice system there are two categories of offenses: felonies and misdemeanors. There are also two government entities that can charge you with a crime. These are the Federal Government and the State Government.

Crimes are divided into two types. There are felonies and misdemeanors. This is true whether the crime is a federal crime or a state crime.

Felonies are the more serious of the two offenses. Felonies by definition are crimes that are punishable by more than one year in prison. Felonies include crimes such as grand theft auto, manslaughter, sale of drugs or drug trafficking, aggravated battery and embezzlement.

Misdemeanors are less serious offenses that are punishable by less than one year in jail. Common misdemeanor crimes are petit theft, driving without a license, DUI and simple battery. Some municipal offenses are also considered misdemeanors if they are prosecuted by the county or city instead of the State. These charges include minor offenses such as drinking in public, urinating in public or being in the park after hours.

Whether it is a felony, misdemeanor or municipal ordinance, all crimes go on your record. This means when a background check is performed they will show up. Felony charges can disqualify you from some types of jobs and a conviction will limit your civil rights. Misdemeanor charges such as petit theft can also disqualify you from some jobs but a conviction will not affect your civil rights. 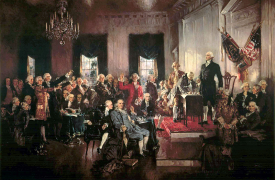 The powers not delegated to the United States by the Constitution, nor prohibited by it to the States, are reserved to the States respectively, or to the people. – The Tenth Amendment

Under the Constitution of the United States, both the Federal government and the States have the right to make laws to govern its people. Sometimes these laws overlap.

If you break a federal law, then you commit a federal crime. Federal laws involve crimes that cross over state lines (such as internet fraud or kidnapping), crimes committed on airlines or in ports of call, banking offenses, and drug trafficking.  If you break a federal law then you are charged by the U.S. Government in a criminal case. Your case is handled in the federal court. If you are found guilty you are supervised by U.S. Probation and Pretrial Services or you are sent to a Federal Prison.

If you break a local or State law then you commit a state crime. You are prosecuted by the State Attorney or District Attorney on behalf of your State. State crimes involve offenses such as burglary, battery and DUI. If you are found guilty of a State crime then you will be supervised by the Department of Corrections or the county probation office or sent to a state jail or prison.

For crimes such as drug trafficking, bank robbery and kidnapping you can be charged by BOTH the federal and the state government for the offense. The Supreme Court has ruled that being charged by both the state and the federal government does not violate double jeopardy.

In both the Federal and State system there is a category of crimes referred to as “violent crimes” or “violent felony offenses.” This category of offenses includes the crimes of

Violent felony offenses are seen as being very serious and carry additional penalties and restrictions that are not usually required for non-violent offenses.